Last week Italian DJ, producer and songwriter Alex Neri came to our HQ for a quick chat and a DJ set.

He began his studio activity collaborating with Marco Baroni and together they released in 1998 their first single “Happiness” featuring Jocelyn Brown, which reached 5th place on dance charts in the US and 45th place in the UK. Around that time the duo also worked on different productions such as Korda and Kamasutra.

A year later, Neri founded globally acclaimed Planet Funk with Gigi Canu and Sergio della Monica. Their first single “Chase the Sun” reached number five on the UK Singles Chart in 2001 and gained huge popularity since Sky Sports adopted it during its coverage of the Professional Darts Corporation’s major tournaments.

In 2004 he has launched Tenax Recordings in collaboration with the notable Tenax Club in Florence. The first single titled “Housetrack” won the SIAE prize for being the most sold album from an independent label.

While Neri continues to produce, he also works on various remixing projects for many international and local artists.

Hello and welcome to House of Frankie, Underground Radio in Milan, Italy. Today I have been joined by super DJ and producer Alex Neri. Hi, how are you? Nice to have you here in Milan.

You’re one of the founder of the acclaimed group Planet Funk, who has gained incredible global success over the years. Recently, one of the band’s founders, Sergio Della Monica, has passed away. Do you have any memories you’d like to share with us?

I met Sergio for the first time in 1997. He and Gigi were the founders of The Souled Out, a group of the 90s quite famous, they did a lot of success in the UK. Back then, I didn’t know they were Italians so for me it was kind of a surprise to see Italian people living in the UK.
So, we – Sergio, Gigi and me – decided to try to do something together and the first track we did was “Chase The Sun”. There was such a great chemistry between us and I’ve felt it since we first met. So, to be honest, for me it is difficult to talk about this now because it just happened. He was like a brother to me and I’m still suffering for this because we are a family, we were a family. Also, all I do is music to share with friends, I have never done something for me personally, I have always made and I still make music, harmonies and vibes with people. I founded Tenax, I founded Planet Funk and other many things in my life always with some friends, because for me music is sharing, is sharing energy, emotions, feelings, love and whatever.

You made a huge career! Do you remember a specific episode or event that has paved the way for your success?

When we started this career, we didn’t know what was going on because House music in the beginning was nothing at all, and even being a DJ was difficult. My cachet was 80 000 lire which is less than 40 euro per night so you can imagine it! Also, the records were very expensive at the time. So, I think it was a complete different vision than today’s young DJs and producers. I mean, when we started, we didn’t know what was happening, because at the beginning being part of House music was like a kind of style of life music. It was exactly like the people who lived the 70s, the rock, the Woodstock era, it was a family. So, we really didn’t know about success or whatever. It was a flow and we just lived it. But even now, we don’t know what success means, we leave it to the music basically.

What’s on your agenda for the future? Are you currently working on new projects?

I have a lot of new projects coming. And thinking about DJing, I’m going back to Ibiza this summer where I have a residency every Wednesday night at Privilege. I have missed Ibiza for 3 years, so I’m ready to go again there!

Over the years, you have collaborated with many international and local artists. Any exciting collaborations coming up? Also, who would you love to collaborate with in the future?

There is this DJ I particularly like, it’s DJ Harvey, and I’m very happy because we are going to play together at Ibiza next summer in July. It’s funny because we used to spend a lot of time together in the UK at the time (I’m talking about the end of 90s) and when we did the first live as Planet Funk in Ibiza, Harvey used to play the tambourine on stage with us and nobody knows this. So, again, it’s nice to see him again because I know he is currently living in the US so we haven’t seen each other for 10 years but we used to play a lot together, so I’m very excited to see him again! It’s not a collaboration but I’m very happy to see him again and to play together because he is one of my favourite DJs ever.

You are one of the founder of Tenax Recordings, which has showcased a myriad of well-known DJs and Italian producers. What’s the philosophy of your label?

It’s always difficult to create a label when you have to share it with your partner. And talking about the club, it’s so difficult to put into practice what you have in your mind because you have to share it with the resident DJs and sometimes it’s not easy. But this is a project and as I told you before, for me Tenax is my family. My friends and I, we started in 1997 with a project called Nobody’s Perfect, which is still active and I think Tenax is still one of the best clubs in Italy and Europe. Having said that, I’m really happy to be part of this project and it’s not my label, that’s the story, it’s Tenax’s label.

Tenax is also a club. Could you tell us its history and its evolution over the years?

Last year we celebrated the 35th anniversary of Tenax club. It was launched in the 80s but, me and my partners, we started with Nobody’s Perfect in 1997/1998. At the beginning it was more of a live DJ club and then, after some years, we started with our project Nobody’s Perfect. Now I think it’s one of the best 50 clubs in the world for the underground, techno and house music, so I’m very happy!

What do you think of the new Pioneer DJ CDJ-2000NXS2? What benefits do you find nowadays in the new DJ technologies?

I’m an old school DJ and I have always found difficult to play with laptops or Traktor or whatever, and I’m not a fan of that sound. But both the sound and the effects of the new Pioneer DJ mixer is amazing! As to the CDJs, I think that if you use them in the proper way, you can do a live editing exactly as you do with Traktor, so I think it’s perfect! They did a great job, I’m a fan!

Your DJ sets are also characterized by the use of vinyl. In your opinion, how important is the comeback of vinyl in clubs too?

I’m a producer and a DJ as well but when I’m DJing, I’m DJing and not producing. So, I think when you’re doing a vinyl set you can really feel the difference between a producer and a real DJ because the latter doesn’t have to be a producer, he could be only a DJ. That’s the main difference. There’s also a difference regarding the sound. The vinyl is still for me the best sound you can have when you play. That’s it!

Our digital platform, House of Frankie, was born as a project dedicated to Frankie Knuckles, and more in general, as a tribute to House music. Do you have any memory of him?

He is the Father of House Music, for sure! We played together a couple of times and he was so nice, such a beautiful person. And to be honest, I think “Your Love” is probably one of my favourite tracks ever, it’s in my top ten and you know, it’s an anthem, a classic. Frankie Knuckles started what are we doing now, so, much respect for Frankie!

Thank you, Alex! See you soon! 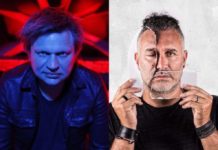